Against all odds Madars Apse became Latvia’s first pro street skater and one of the most famous pro skaters in the world. When he started skateboarding Latvia didn’t have a skate industry or skateparks at all.

Madars learned how to skate from skate videos and watching pro skaters at contests that he would travel hundreds of miles to be at.

The distance didn’t matter to Madars. He was so stoked on skateboarding and as he travelled and put more time into skating he quickly developed his unique creative style on a board.

Madars is pro for DC and Element and he's now a No Comply Network member so we hit him up for a chat about growing up in Latvia, his TV Show ‘Mad World', skating with Wes Kremer, his El Toro Firecracker and his favourite things to watch on and off his board.

What's your full name, where did you grow up and where do you reside now?

My full name is Madars Apse.

I grew up in Ventspils, Latvia and I still live there now.

What does your name mean?

Madara is a plant; so it could be considered a flower or a bush.

In English the name is Gallium and some species are informally known as Bedstraw. My last name Apse translates to the tree Aspen.

When did you first learn to skate?

Well, my first encounters with skateboarding were from my brother, but the first time I really started to skate was when I made some money selling flowers and ended up buying a skateboard myself.

It had flames on it of course. It was the cheapest one they had in-store.

My parent’s house was across the street from the local skatepark so I started going there often, dropping in on all the ramps and doing rock to fakies and fakie tail stalls everywhere.

I had no proper skate shoes so I would skate in sandals but later I got some skate shoes from a second hand store next door to the park.

Also when I started I skated in pads my elbows, knees and shins were all guarded very well.

But that did not help me to gain acceptance from the other kids in the park though.

The beginning was tough, but so fun anyway. The first flip trick, the first lock into a 50-50 stall.

Dude it all felt awesome and it still does today. 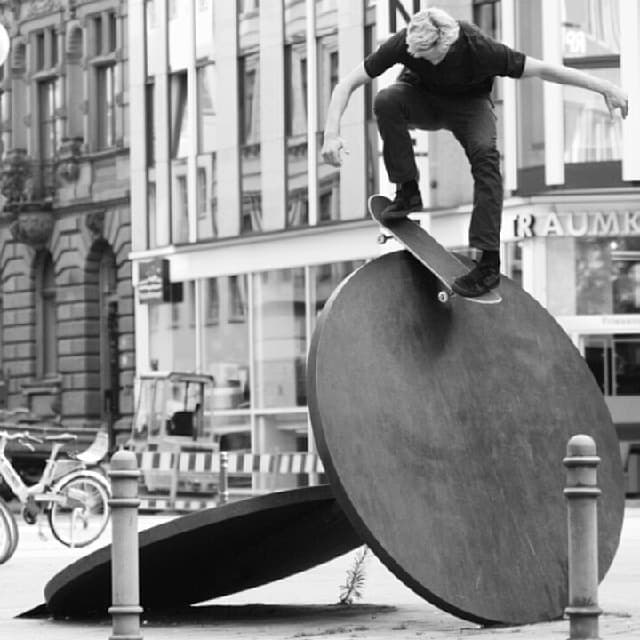 That’s sick. So are you the first Latvian pro skater then?

There was a slalom champ who got a pro board, but in the street skateboarding world I am the first and only one so far.

It feels a little lonely.

I wish there were more Latvian Pro skater’s out there, you know?

Anyways, I am embracing my status as the first Latvian pro as much as I can and make appearances in the media all the time.

Why do you think creativity is important in skateboarding?

Creativity is skateboarding to me.

Also skateboarding is fun. Also it is fun going fast and getting that adrenaline rush.

When I grew up watching skate videos I really enjoyed watching never before seen tricks that would challenge the skater both technically and gnarly.

That is just what I liked and tried to recreate, so when it came down to film my own video parts.

All of them in one, not to mention all the other super good skaters that I’m forgetting!

What creatives who skate inspire you and why?

First of all it would have to be Thomas Campbell, because he makes art music and film at a very high quality standard and he inspires me as a friend.

And secondly I would have to go with Evan Smith and I will not give any reasons why, he is always on to something.

How do you learn new tricks?

Well it happens different every time.

Sometimes I go to a spot with an idea, sometimes the filmer or someone else tells me what trick to do, sometimes I accidentally discover of a trick I could do and most of the time I just start skating the spot and get as much clips as possible.

Ideally, though, I already have a “dream” trick I want to do and I focus on that, making baby steps towards my goal.

That’s the thing: “You have to start small and slowly get comfortable with it until you are the ruler and not the spot”. 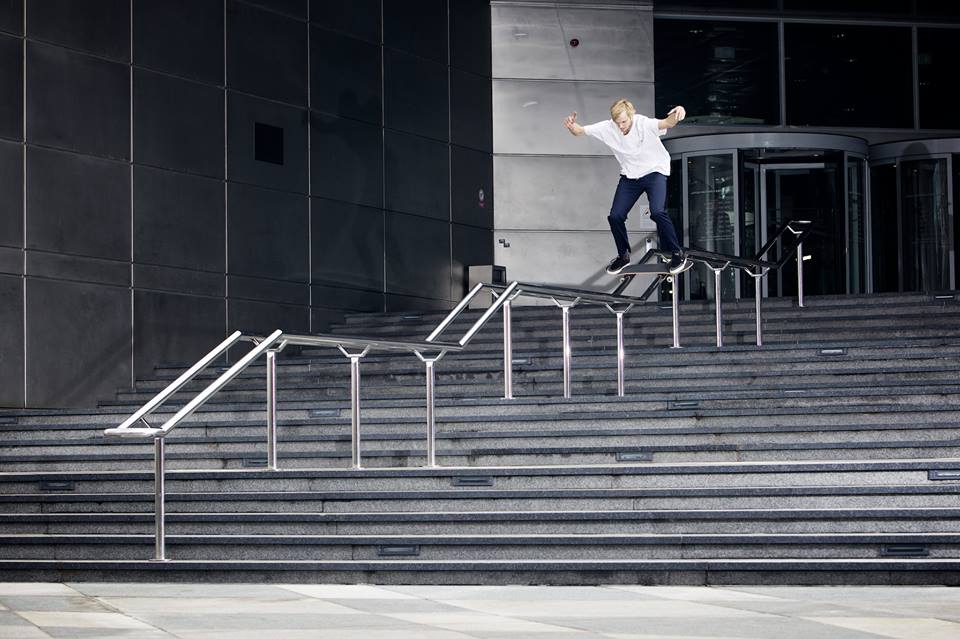 You lived in the UK for a short while. What was your experience like?

I lived in London in the winter of 2012 for the last year of my Bachelors in Business. I was studying in University of Westminster.

I enjoyed the time as it was not raining much; I had super awesome flatmates and lived next to Mile End skatepark.

I got to go skate with Hold Tight Henry and go around everywhere with him.

I was playing guitar, listening to good music, going to the swimming pool & sauna, eating some good Indian food and English breakfast.

I have some good memories from that time.

You've got your own online Show ‘Mad World’. How did it start?

Well it all started after I won European Skater of the Year and some producers from London saw my “Acceptance video” at the awards, as I myself was in New Zealand then.

They were making a YouTube channel, called Line9, and wanted me to be the skateboarder.

They offered me the chance to present my own show ‘Mad World ‘show, with a generous budget, and I accepted their offer.

As a kid I always wanted to be an actor performing dangerous stunts and doing comedy, like my childhood comedy heroes so I was into the idea of it.

What comedians make you laugh?

So, are you still making new episodes of the show?

We did two and a half seasons of the show and then they stopped focusing on the channel as their football channel got a breakthrough.

So Line9 stopped there and I got to continue the show with the help of GoPro, less episodes, smaller budget and on my YouTube channel, that lasted for about two years and now I am finally off it.

Yeah it looks now as though we will do a new Mad World show this year so look out for that!

It must be Habitat “Mosaic” because I watched that video more than any other skate video..

Mosaic is a classic. What's your favourite documentary ever?

Dude, there are so many, but I’ll just go with “Big River Man”.

It’s Dan Drehobl’s favourite too and I love Dan. 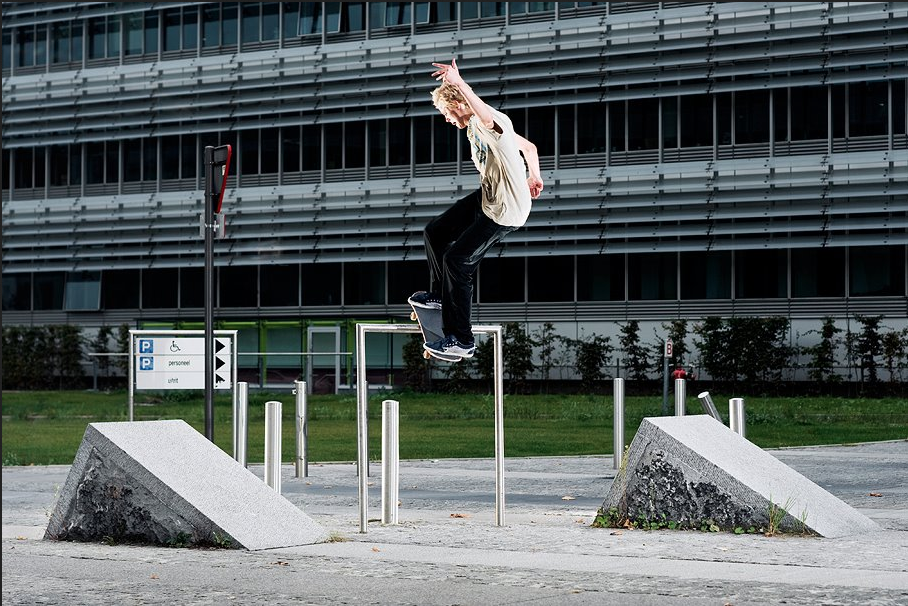 Your mates with Wes Kremer, what do you like about his skating?

He is sharp like a razor when it comes down to business and usually lands his trick first try, and they are no regular tricks, I’m talking about gnarly bucktown business.

Probably the hippie jump flip on a bump to bar Wes did in the Sk8Mafia video in his shared part with P-Kid.

Best trick you have ever filmed?

I’ll go with the handstand 50-50 grind as I felt like I was in the Tony Hawk's Pro Skater game for a second.

Your firecracker down El Toro was fucked up. How many times did you try it?

It took sixty tries and I remember rolling away from it like it was nothing! I thought it was whack for a second, but Ricki The Dude convinced me otherwise!

Also I remember he was asking me of tricks I could do the day before and nothing came into my mind, besides the firecracker. So I mentioned it to him and he instantly said we should go to El Toro, and so we did and it worked out!

You've skated for Element for a while, how did that come about?

I used to watch the Element World Tour a bunch, I was a fan of Bam Margera, later on I watched a lot of the European video “Rise Up” and it got me motivated to try and get on the team...

They were having so much fun it seemed, I just wanted to be in the van with those guys!

You just had a part in their last video ‘Peace’ . What was your favourite trick in your part?

Do you have a favourite UK spot of all time?

Stockwell is the best. What's your go-to spot in Latvia?

The berrics is our secret DIY spot for locals only; it’s got a bunch of good flatground, a box and a Manny pad. Some more obstacles to be built very soon!

What's your plans for the future Madars?

I want skaters to come and skate Latvia and get in touch with me if they want to. So if you do, please drop me a message and let’s get it going everyone!

Much love and thanks for reading this.