Rich SmithNo Comply Network2020-06-18T07:06:44+00:00
Rich Smith is a skate filmer and brand owner who has made his name by creating jazz-infused skate company Skateboard Café and also capturing hours of quality footage with skaters on his team and hundreds of others around the UK and Europe.
Rich is a great skater who creatively finds the balance between running his company, making videos and working for freelance jobs, he’s constantly pushing his plans forward.
Now he is a No Comply Network member we talked about how he started to skate and film, getting his first board at Fifty Fifty in Bristol, running Skateboard Cafe, Gaurab Thakali, sponsoring Shaun Currie, hanging with Mark Pritchard and Andrew Makepeace, filming Mike Arnold’s first part for Thrasher , Lloyds, Korahn Gayle and his favourite skaters, spots and tricks of all-time . 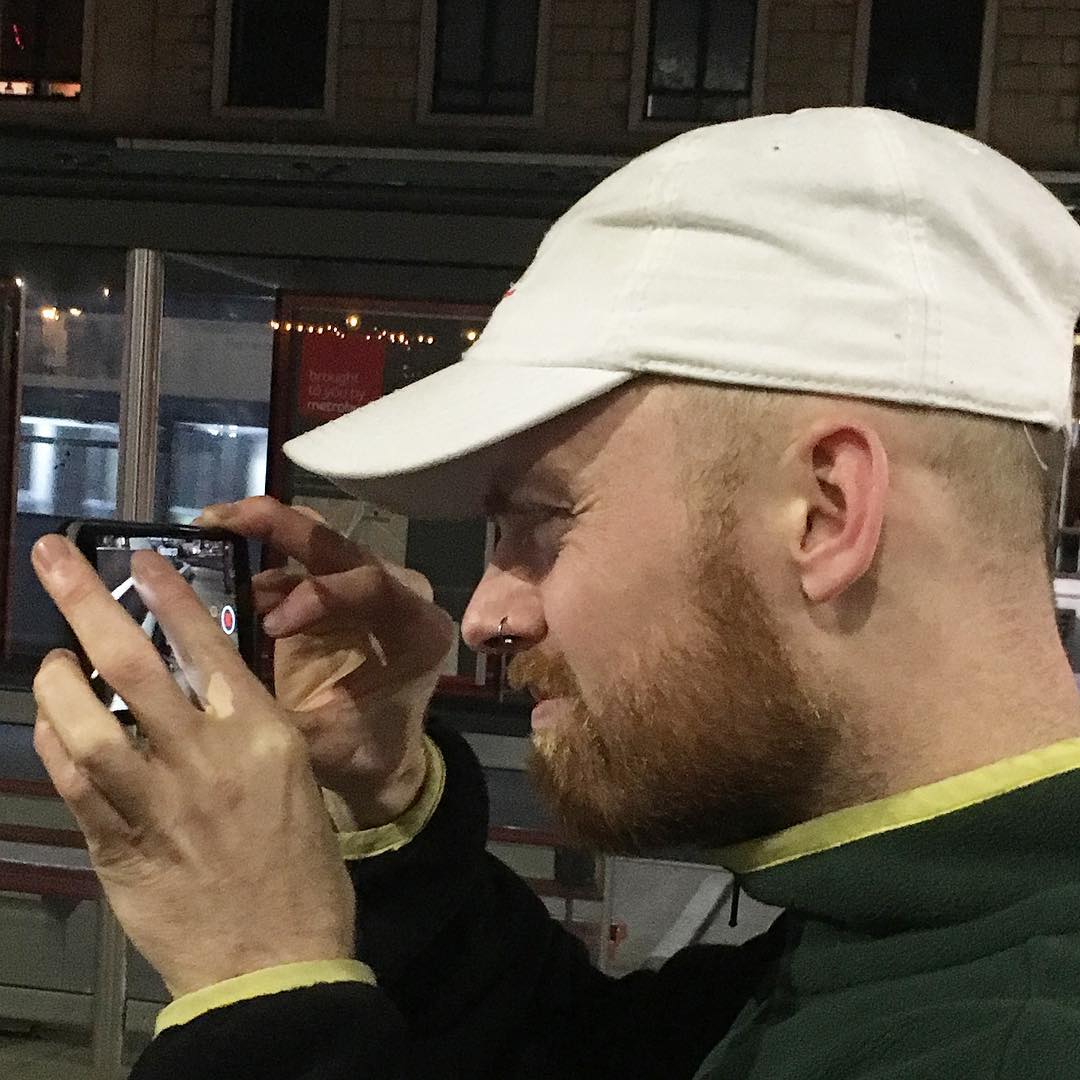 Where did you grow up Rich?

Far away from electricity on the outskirts of Bristol.

How did you get into skating?

A friend from school brought round a setup and we just shared it for a bit, skated in my parents driveway and had tick tack races haha.

What was your first proper board?

First proper board was a shuv it blank from Fifty Fifty with some baby blue Royal trucks, can’t remember the rest.

My younger brother Bill Smith and a small group of friends from our area, just doing ollies and landing kickflips one foot for an embarrassing amount of time aha.

Where would you go and skate?

Our old primary school which had a perfect 4 set and some benches, we had one of those weird shitty Woodward skate parks near by which I learned to love, then eventually we’d venture out to Lloyds and College Green in the centre of Bristol.

What motivated you to pick up a video camera?

I can’t really remember to be honest, there was an old VHS camera lying around at my parents house that i’d mess around with… No intention of making skate videos or anything.
Flip “Sorry” & Transworld “In Bloom” were amongst some of the first videos I watched, they got me hyped on skating but it wasn’t until seeing more local stuff, Fifty Fifty’s “Jus Foolin” & “Bristol In Bloom” by Louis Gane that really inspired me to film. They were much more relatable, spots I’d been to and skaters I’d seen about – that’s what got me thinking aye maybe I could do this kinda thing with my friends.

What was the first skate video you made and who was in it?

“Skateboard Cafe” an independent scene video released in 2008. The intro was shot in an old 50s diner style cafe, with Jazz music playing and stuff, it had parts from Mark Pritchard, Bill Smith, Ashton Launcherley, Jason Lewer and Tom Gibbs. Korahn and Makepeace had a bunch of tricks in it too.

What camera setup do you film on nowadays?

When did you first realise you could film skating as a job?

Wait you can do that? Ha! I don’t actually make a living from filming, I’ve been pretty lucky to have some nice freelance jobs over the years but I wouldn’t say I’ve gone for it as a ‘filmer’ – Massive respect to anyone that does, it’s a graft and a half. I’ve always done it to fuel Cafe in a way.

Must have been about 14, it was like walking into Narnia mate haha, a breath of fresh air, especially for someone coming from the suburban outskirts.

Fifty’s still the hub and heart of the community, always getting behind events, premiere’s etc. Looking out for the next generation, getting them flow shoe deals and stuff when the time’s right.
Syd aka Justin Sydenham who runs the shop helps organise ‘Camp Hillcrest’ in the school holidays – giving kids the opportunity to skate parks all around the southwest, go camping, visit the store, screen print their own tees and stuff which is really cool, I would have loved that kinda thing when I was younger. And obviously the shop supplies the finest hardware, footwear and clothing.

How did Skateboard Café start?

There’s been a few stages I guess, I mean the video was 2008 so technically then but it’s really been a slow developing thing.
Around 2009 I made a small run off tees for sale in Fifty, shortly followed by a bank loan of £1000 and a small run of boards. Again sold through Fifty and I think Lost Art and Legacy Skate Store were amongst some of the first stockists – thank you guys!
Makepeace got involved around this time, I remember not being able to afford tees alongside the boards which was a shame, so he offered to pay for them and we eventually ended up working on the brand together.

Who officially runs the brand?

Myself and Andy Makepeace, we’re 5050 owners. We both work on graphics, Peace handles the distribution and business side of things and I spend most of my time out filming the crew between Bristol – London – Sheffield, making edits and creating imagery for our site and Instagram.

How did you become filmer for Skateboard Café?

My filming came before I started the brand, so i’ve never not been the filmer for Cafe I guess haha

How’d you get Shaun Currie on?

It came about through Mark Pritchard who’s one of my closest friends.
He went to Sheffield for Uni and became good friends with Shaun, so I met Shaun through visiting Mark up there. I’d been a massive fan of Shaun’s skating way before I knew him, so I was hyped to meet him.
All three of us hit it off! I remember visiting in the depths of Winter one time, with not much hope of skating let alone filming. Ended up leaving with a small Shaun part, filmed over 3 or 4 days.
We just stayed out skating every day, all day and night, was so fun. I was buzzing, as soon as I got home made a little edit with the footage and sent Shaun a link.I put a Cafe logo at the end and it went from there.

Probably his “Honey” part, crazy that was filmed in a couple visits to Sheff.

The skate footage you filmed with the laptop of Ollie Lock was sick, what inspired it?

Ah yes, my phone ran out of battery and I really wanted to film. I got my laptop out and started playing around with photobooth, we thought it would be funny to film a skit of me filming with it, so we did, I just hit record for a laugh and it actually turned out pretty good aha. Maybe i’ll switch to this format for the next vid.

Sonata was sick, how did that come together and what was the best thing about making it?

Sonata was fun, there was no pressure for everyone to film a part or anything, it was just – lets film until this point and bring out whatever we got. Simple.

Harry’s scorpion, Sam’s Front Heel and all of Layth’s footage.

Favourite board graphic and why?

I loved the bar series Gaurab Thakali did for us. I’m a fan of all the old Chocolate stuff by Evan Hecox and this felt like our own version of that. 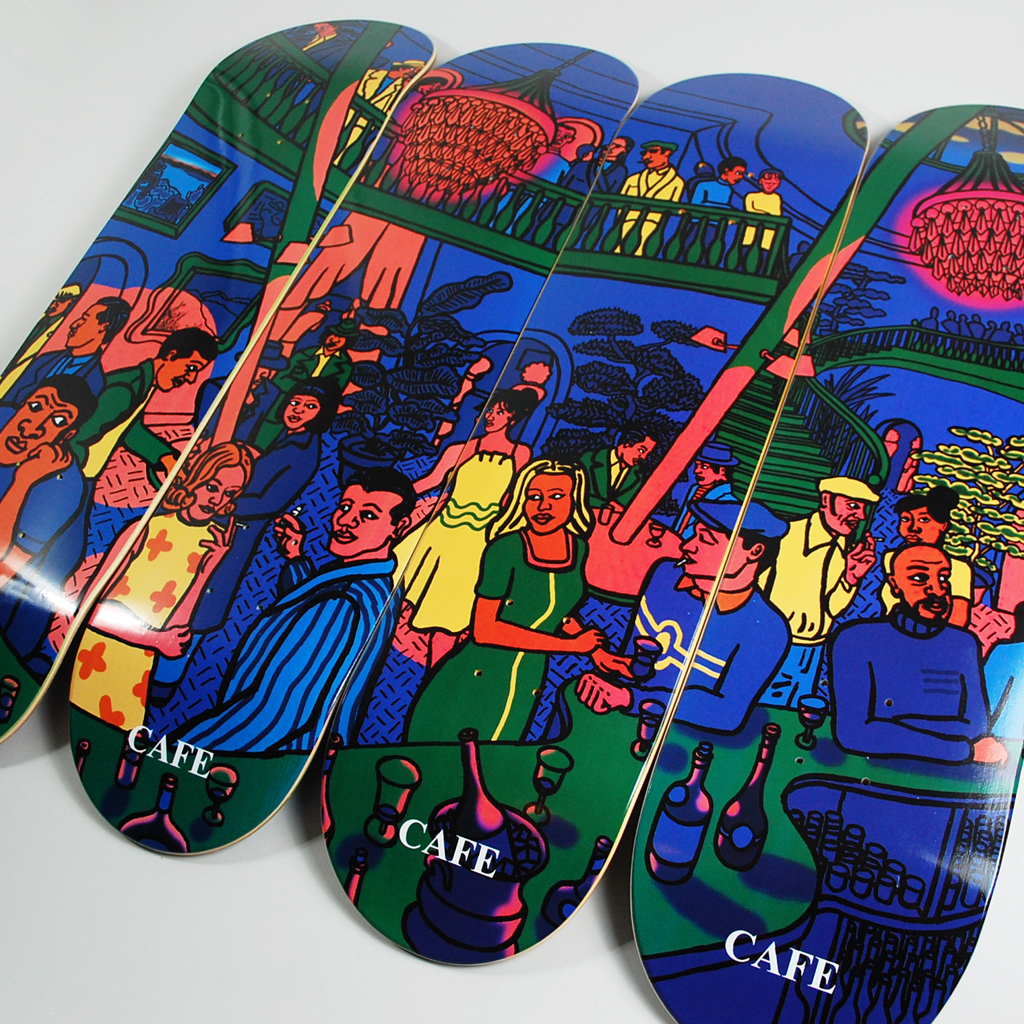 My favourite’s the Jazz sketch boards & clothing we made last Summer with my dad’s artwork on. He’s painted and drawn since before I was born just for the fun of it, so it was nice to put his work out there and see it getting sold all around the world. A nice way to share skateboarding with him. Hope to do more in future!

You’ve done a lot with Gaurab Thakali, how did you two connect and start working together?

So Gaurab is good friends with Layth’s brother Luay Sami, who’s also a really good artist  and Layth put me on to his work. I reached out to him in an email and it went from there. It’s funny actually, the first piece Gaurab did for us we decided not to use. Our graphics then were more cartoony, bold, lot’s of donuts and coffee.
We waited another season or two as our direction was changing and it was more fitting to introduce his work. Since then we’ve worked together almost every season, cheers Gaurab, appreciate you!

Mike Arnold’s Lloyds section was rad. How did you film that?

Originally we were just trying to make something to promote a Cafe X SML wheel that was coming out. Inspired by Bobby Worrest’s Pulaski section we intended to film a little something with that same concept – all at one spot, both living in Bristol at the time Lloyds was the obvious choice.
It gradually escalated into something we’d put too much effort into to be an ‘ad’ – it needed to be a stand alone part. We ended up spending over a year on it. Was incredible seeing Mike piece all that stuff together.

Favourite trick from Mike’s Lloyds Thrasher edit and why?

Ahh so many to choose from! One of my personal fave’s (think it’s one of Mike’s too) is the ollie over stair gap, bs bigspin then switch ollie the next stair gap.
It’s funny because we went home that day thinking we didn’t really get a clip, Mike completely ghostied the board on the switch ollie, almost like a switch hippy jump.
So we thought we’d have to try it again another day, get it cleaner or whatever. But after logging it, we realised it had everything we wanted – I was happy with the filming, Mike did the line how he wanted, landing perfectly into the set up for the next trick… And we learned to love the ghosty switch ollie haha.

Rancid Harry is a legend, how did you meet?

Salt of the earth. Pretty sure we met just hanging out at the green, around 2007 maybe? I just started pointing my camera at him. Following him around doing stupid shit and ollieing the bench. Not much has changed haha

I still really like the tight hippy jump he does in Alfresco (2015) that kinda thing is pretty rinsed now but at the time it was unusual.
Also his switch 270 Tailslide Shuv at Lloyds, it’s rare we film a tech trick together so when it happens it’s bloody great. The after bang is pretty good too hahaha

When did Layth get back on board and what’s it like filming him?

The T1000 never stepped off his board. He was just under the radar for a bit, ageing like a fine wine. Love skating with Layth, he shares my passion for flat ground at the green. it’s so sick watching him go round in circles there landing switch tre after switch tre, not sure i’ve seen him bail one come to think of it.
Filming with him’s an absolute pleasure, he manages to keep such a level head even when jumping down the biggest shit.

His opening line in Ensemble. You kinda think the line would end at the switch crook and then he bangs out possibly the best trick in the line. Also fakie frontside flip St Paul in London – that clip needs more appreciation.

Nothing specific – Our team is such a crazy mix of characters, trips are always pretty eventful to say the least.

You’ve got some stylish nosemanuals, who has your favourite nosemanual and why?

Ha, cheers! Dave Mackey – I grew up a big East Skateboards fan and loved his part in their “Vapours” vid – he does a bunch of cool nose mannys in that.

Besides the Fifty Fifty Shop videos and BIB, possibly Josh Stewart‘s Static 2.
Blueprint Lost & Found is up there too.

Do you have a favourite skater?

Do you have a favourite artist?

Where is your favourite spot to skate in the world?

Thanks to anyone who’s supported Skateboard Cafe- whether it’s buying some product or enjoying our videos, it all means a lot.