Born to a lawyer father and a circus performer mother, skateboarder and photographer Deville Nunes had already lived in five countries before he started skating in his teens. All these years later, he’s not only team manager for the iconic Powell-Peralta, but also shoots photos and videos for the company, with his picture of Brad McClain pulling his signature tweaked back foot rock-and-roll at LES in New York – in my humble opinion – one of the best skate photos of all time. 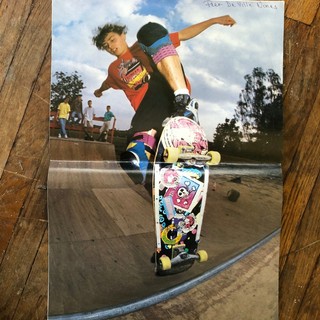 I read in an old skate mag that you lived on three different continents by the time you were 15 – why’s that?
Deville Nunes: I was born in Cape Town, South Africa. When my dad went into exile from Apartheid in the 1970s we moved to Austria, where my mother is from. We then lived in Holland, Connecticut, New Orleans, New Jersey, and then back across the pond to Reading, Berkshire. In New Jersey, at 12, I began to skate. My mum supported me as a means to build up my self-confidence to deal with my dyslexia.

It was in England that I really got into skateboarding; my mum established a Skateboarding Association of parents to support us in Reading, and they built a ramp for us in Tilehurst. It was the big thing at the end of the 1980s, beginning of the 1990s. All in all, my formative skateboarding years, I owe everything to my really good UK skateboarding friends and my experiences with them.

Ever skate with Tom Penny?
Yeah. One time we skated the Oxford mini with him. To be fair, he was quite young at the time and we were better than him [laughs], but he got one run in and we looked at each other with astonishment as we realised, ‘This kid is good.’ So we stopped snaking him.

What about London? You mentioned you skated there when we first chatted. Who did you skate with?
Me and my crew would skate around London sometimes with Alex Moul and Simon Evans.

Were you sponsored?
Jeremy Fox would give me discounts for Deathbox boards – the company’s name before it became Flip Skateboards. When my mum was trying to get a ramp built in Reading, I went down to London with Jeremy Fox, Sean Goff and Alex Moul. We went to South Bank and Sean was like, “Hey Alex, do that you trick you do.” He did an ollie one foot, and that was so rad because that trick was unseen at the time. Alex taught me how to do one foots in London at Southbank that day. 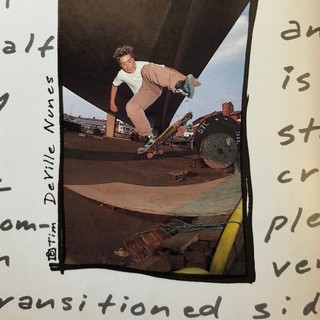 Did you film all this?
Not really – I’ve got pictures in Skate Action and Read & Destroy (RAD).

Did you shoot photos much back then?
No, I didn’t start shooting ’til later, around 25. In NJ, I’d skate with Joe Krolick, who always had a camera and taught me how to shoot. Since I was shooting photos and wanted to go on skate trips, I thought maybe I could shoot and be a TM [team manager] for a skate company. I was shooting Rodney Jones at the time for a Bones ad, which led to meeting Rob Washburn and eventually applying at Powell Peralta.

Which contests did you skate in England?
I remember Sean Goff had a contest. Tailslides just got invented, and I remember doing them in the contest. The way you got entered into the contest was a guy would come and put a beanie on your head so you could go into the finals. Alex was killing it this contest. He was one of the judges and Penny was following him, copying his tricks at that contest. I won that contest, Penny got third and Dunston, my friend from Reading, got second. Sean Goff told me, “As you’re the winner, you can take anything off the winner’s table.” I took a Skull Skates Phil E board – a horrible shape, but it made me not want to skate it and just keep it. I still have it now.

How is your job as Powell Skateboards TM day-to-day?
It’s the best. I used to shoot mostly photos of the riders for the mags, like Thrasher. But the Powell Peralta filmer got hurt and I had to take over filming. A regular day will go like this: pick up the team riders, buy them food and gas – Powell Peralta is really awesome about taking care of stuff like that for the skaters when we go out for sessions – and then we’ll drive to LA or San Diego and hit as many spots as we can before it gets dark. On the days we’re not skating, I’m usually in front of the computer all day. I might be sending out boxes, editing photos or video. I’m also one of the people who posts on the Powell Peralta Instagram every day. 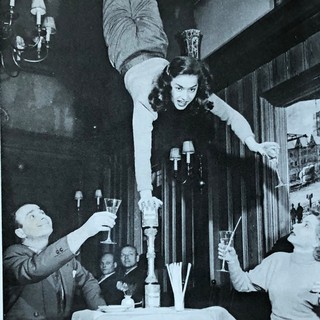 Deville’s mum in her performing days.

So you’ve taken over the filmmaking? That’s a lot on your plate.
It’s a lot of fun to hit the streets with the team and travel. It’s not too much on my plate because video has taken over a lot of the photography – now, with the internet, we need more video.

The original 80s Powell Peralta, Bones Brigade films, they were the first skate videos ever. What were your first impressions at the time?
Public Domain was the first real video I ever watched when I lived back in England. I saw other videos, but we didn’t have access to watch the other videos that came out before then. My friend brought over a Betamax and I would watch it before and after school every day. Pre internet-era, every video was a classic and you just replayed it over and over.

What does Stacy Peralta do at Powell these days?
Man… he invented what we know today as the skate video. He’s been at the warehouse working on mini-docs with the team riders lately. He’s putting it all together and filming, which is amazing. We just did one on Salman Agah that should be out soon. There’s a really good one on Charlie Blair, called Get Back Up, that Stacy did.

What was it like making Fun for Powell back in 2009?
Eighty hours a week, and out every night filming. Powell had our backs with a lot of food and gas. It was great, and a lot of fun.

How was it filming Ben Hatchell skate? He was skating off the charts at the time. Insane. He filmed his part in three months. He basically came and stayed on my couch and filmed that part. I think he was 17 at the time. He’s a rad person. Ben likes to make bets, lots of bets. It’s always when he thinks he can make the trick. Like, “If I land this trick, can I drive your car and do burnouts all day?” The tre flip into the bank, he got broke off and winded, but he got it the second time and took my car to town.

I was thinking about it, and Powell is arguably the most World Record-holding skate team. The first pro team in skating; sponsored arguably the biggest names in skating, Tony, Cab and Mike V; Stacy made the first skate videos; and the modern team has two Guinness World Record holders, Jordan Hoffart and Aldrin Garcia.
Funny you mention that, because we hired WWE performance coach Sean Hayes to get Aldrin Garcia’s core strength up to do the high ollie contest. We did weights, workouts and all this shit. Aldrin was throwing up because he was working out so hard. It worked, because he had to do the high ollie three times before they counted it. The crazy thing is that he got knocked out three weeks before at a Black Box contest, and flown to the hospital. His mum told him he couldn’t go to the ollie contest and hid his board, but Aldrin went anyway and won. 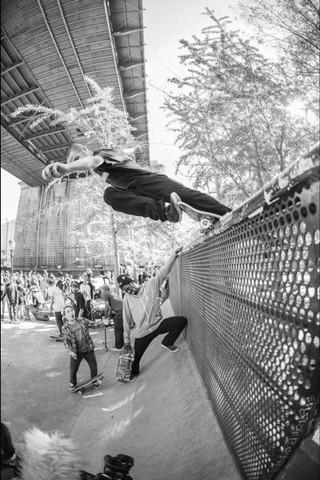 Happy ending. Can we quickly talk about the rock-and-roll by Brad McClain that you shot at LES in New York? It is, without a doubt, one of the best rock-and-rolls of all time.
It was on the New York part of “Let’s Go Skate Tour” 2015. We were just doing a demo at LES in NYC and he was trying it. I had the two kids in the back, Shane Borland and Aquil Brathwaite, do something funny in the background. We were there to skate and had some friends hang out – it was cool, and a great time.

Is there footage?
Terry, our OG skate filmer, had that footage on a drive that crashed.

That’s gnarly, nobody will ever get to see it. Wow. LEt’s end where we should have started – how did you first get into photography?
I got into photography because of skating. I wanted to recreate the shots I saw in the magazines. My friend Joe Krolick taught me. He was a photographer who shot a Penny cover for Thrasher, and was also a filmer for 411 and Vans. I saw him learn from Ryan Gee. Now, I like all kinds of photography. I just went to China with my good friend shooting photos around the ghettos. 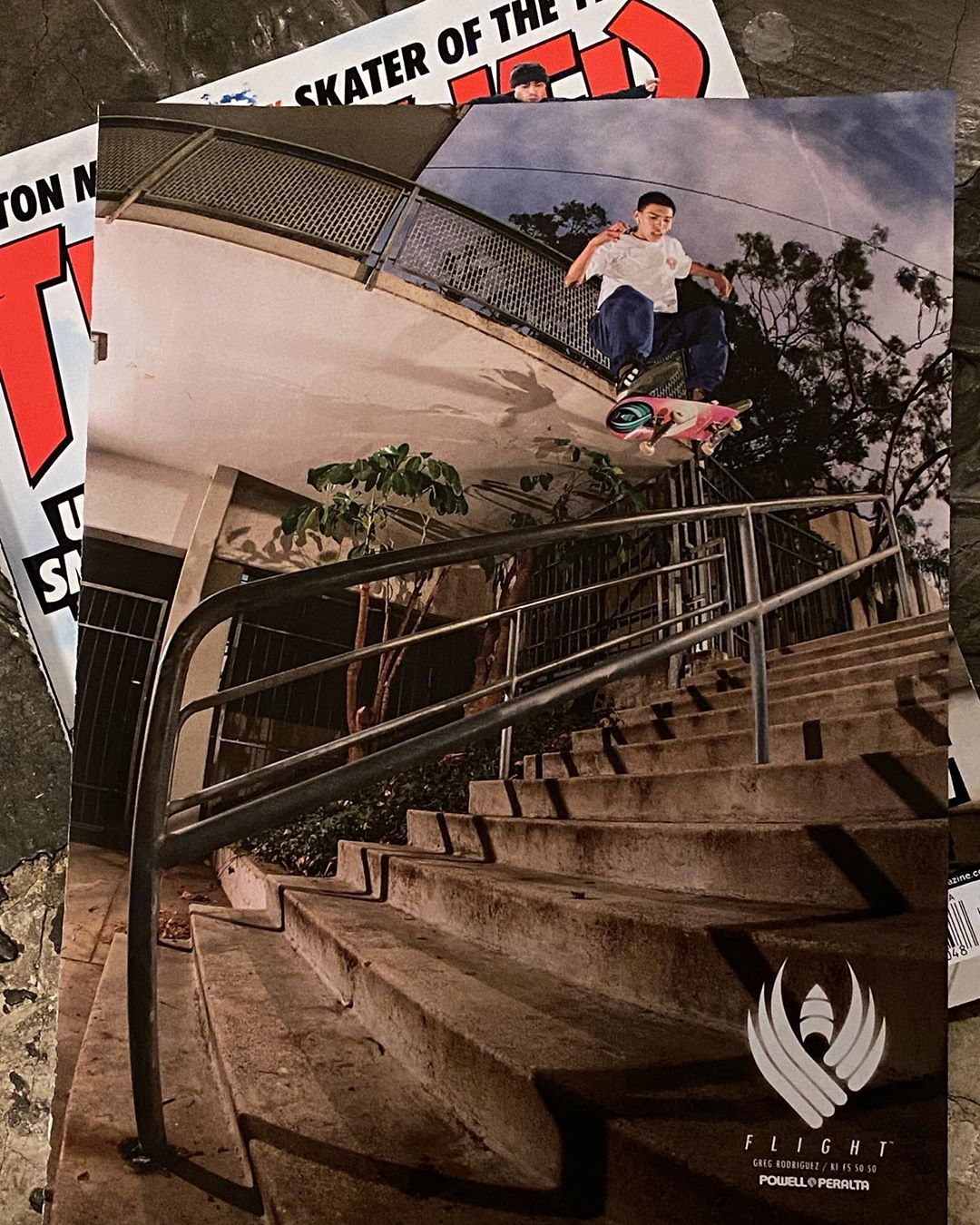 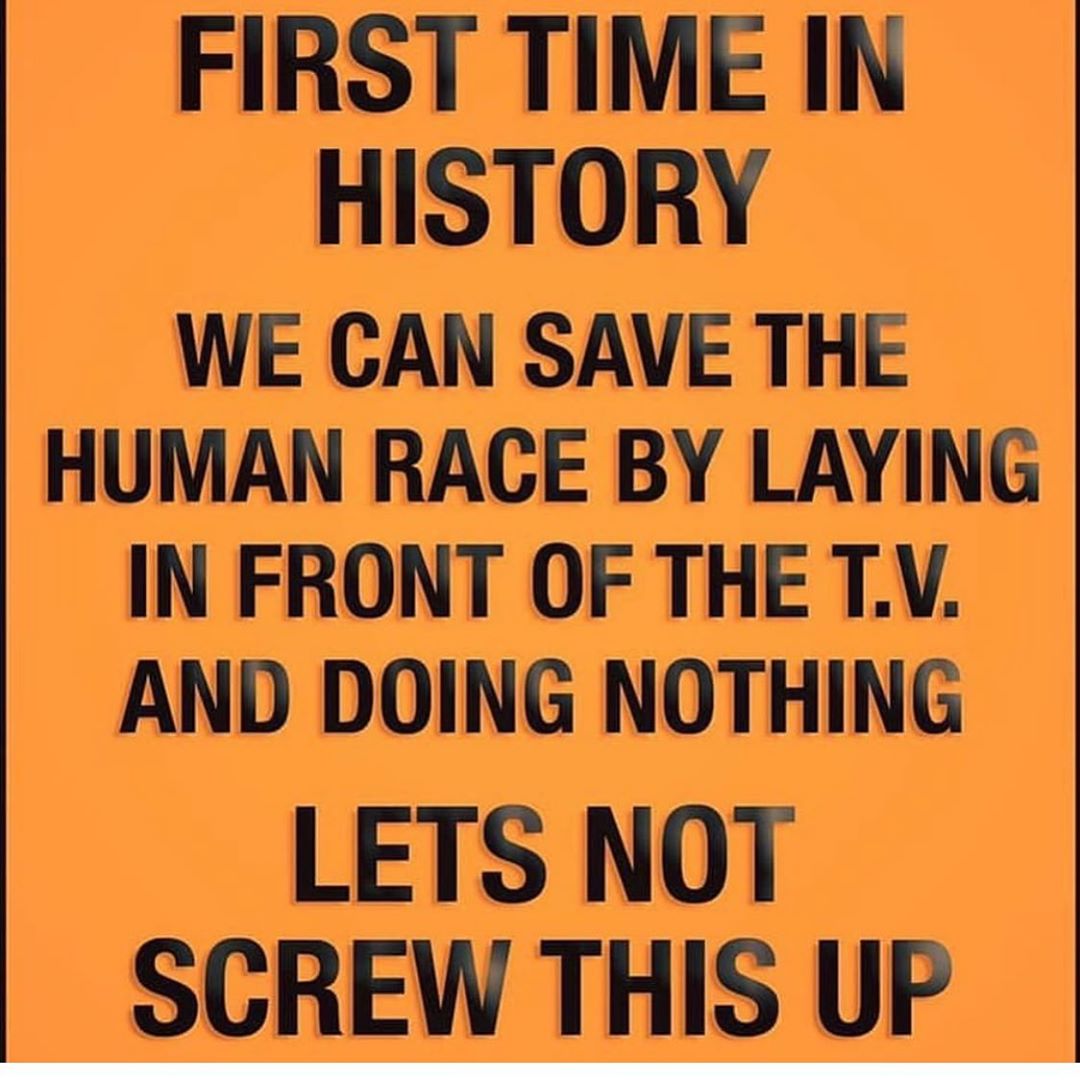 There’s gonna be a lot of babies being born nine months from now…. 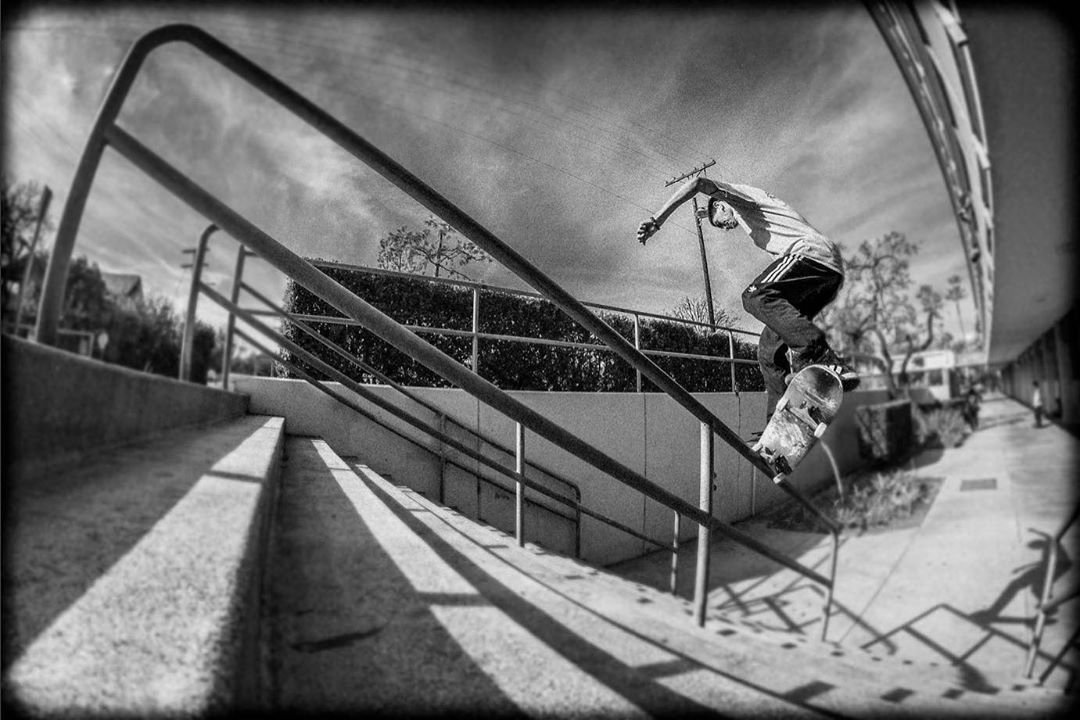 Gallery image with caption: There’s gonna be a lot of babies being born nine months from now…. March 21, 2020