Tim is a skateboarder, Director of Photography and Camera Operator based in California. In 1991, @rodneymullen picked Tim to film for the original World Industries team. Tim now shoots on some major productions such as Deadliest Catch and HBO’s #Curb Your Enthusiasm.

“For me, EVERYTHING boils back to skateboarding. Skateboarding and filming skateboarding has defined the way I see the world and it doesn’t matter if I’m shooting a commercial, television show, feature film, etc. — It continues to shape the framework on whatever project I have at hand.

When I’m thinking about stuff in the skate world that gets me inspired to create new work I would say I love @thenineclubshow! What Chris Roberts, Roger Bagley, Kelly Hart and Eric Longden are doing is beyond awesome!

I think The No Comply Network is a good thing. Anything that brings people together & helps promote positivity is super rad in my book.

I’d like everyone to know that in June of 2018, for it’s 20-year anniversary, I will be re-releasing the independent skateboarding video I made called ‘Listen’. The video was well received in its day, & fingers crossed the new generation of skateboarders will also embrace it!” 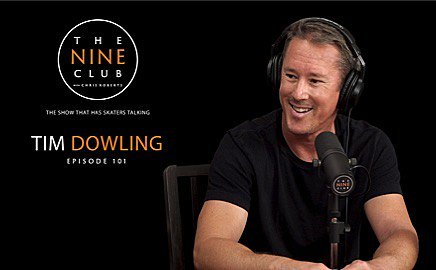 I am beyond honored @thenineclubshow invited me to sit in the hot seat, so tune …

I am beyond honored @thenineclubshow invited me to sit in the hot seat, so tune in tomorrow & listen to, ...
Read More

Gallery image with caption: I am beyond honored @thenineclubshow invited me to sit in the hot seat, so tune … June 17, 2018