Dan Mancina is the world's first ever blind pro skateboarder. But that’s not the only thing that defines his story. Dan's passion to pursue challenges is unending.

His lack of sight hasn’t slowed down his ability to experience new things, have fun and get sponsored. After he gradually lost his sight in his mid-20s Dan reconnected with skateboarding and after attempting to relearn what he lost he eventually got sponsored by Real skateboards and Adidas to do it again.

Now that Dan has joined The No Comply Network, we caught up to find out how he learnt to skate with no sight, going pro, meeting Jim Thiebaud, Real, Paul Shier, adidas, his company Keep Pushing incorporated, adaptive skateboarding and how he rediscovered himself through rolling on his board.

Where did you grow up Dan?

I grew up in a little town called Livonia just outside there. 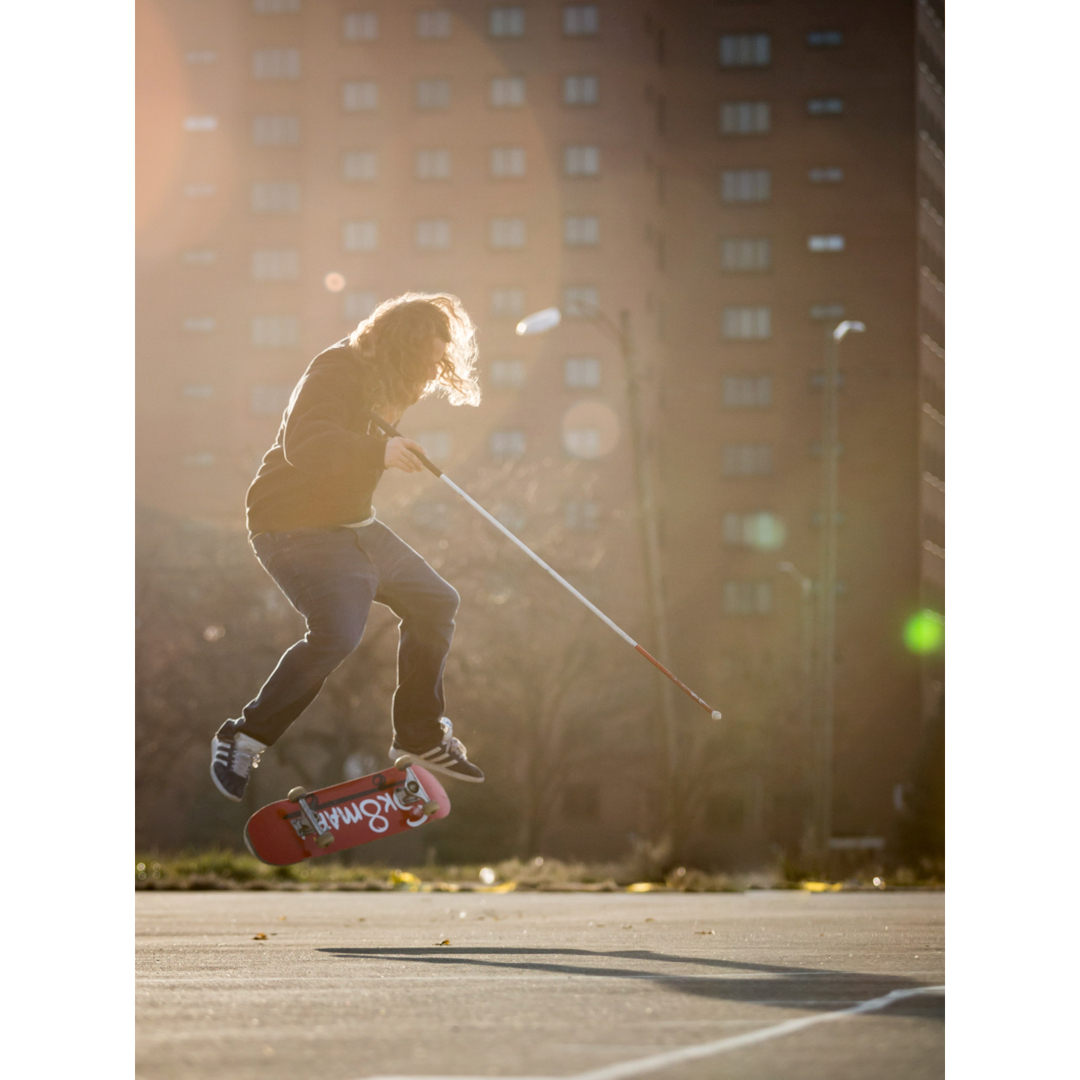 My childhood was a mix of going up north to go camping and being near the lake and then coming back to the suburbs and skating round there.

Who did you skate with?

I started pushing on a board when I was about seven years of age but that was just pushing around.

It wasn’t til I wabout thirteen that I started skating properly.

I met a group of friends in middle school and we all became consumed by skateboarding.

What was the name of your first skate crew?

My skate crew was in High School, we called ourself the Bushwick Skate Mafia!

Jokes.What were you skating at the time?

There weren’t any parks, all we had was a ledge spot that had some manny pads.

I always tried to skate random stuff though that other people wouldn't skate, just like anything from a rock, to a pole jam sticking out the wall.

That was when that whole suburban skate videos like Josh Stewart' Static series were taking off in the early 00s and myself and our whole crew were really influenced by that. 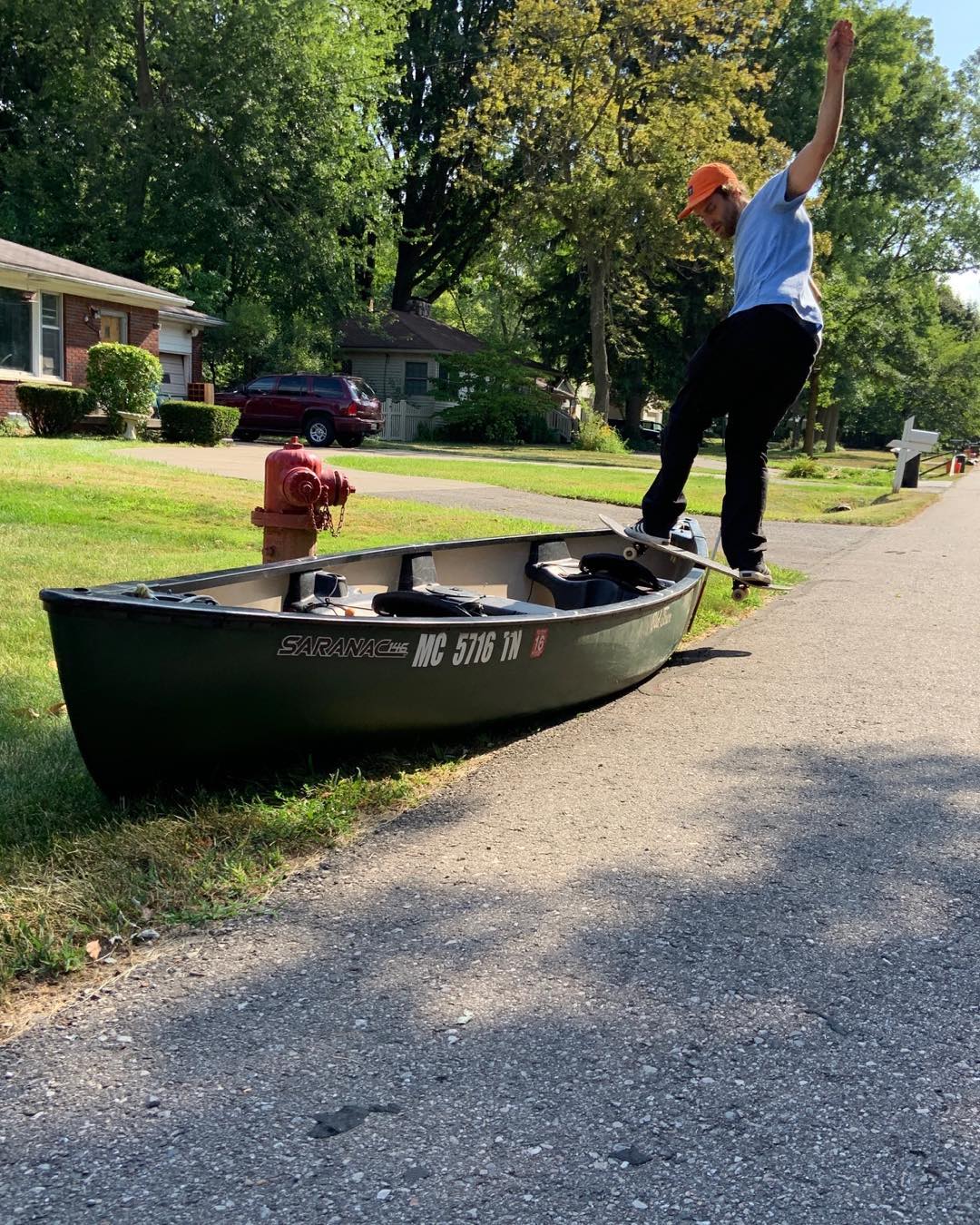 I was the typical skate rat, coming up.

I worked at a skate & surf shop called Flush in Detroit, Michigan but its closed now.

I skated there a handful of times when I was younger but Detroit wasn’t my go-to city to skate.

We always had a really good scene, and some great filmers.

That was the era when new skate videos were a huge thing, all the Zero videos were coming out, everybody was buying stacks of VHS tapes.

It was so expensive!

Our one buddy would get all the videos and we'd go to his house to watch them.

My favourite video from that era was Transworld's In Bloom, DVS Skate More and Bag of Suck was the real deal, I was really into that and of course Chomp On This.

Agreed. So, when did you start to experience issues with your vision?

When I was around 24, my vision got so bad I had to stop driving, then I couldn’t ride a bike.

Then eventually walking outside became difficult and I was unable to leave the house without assistance.

So it was gradual

It took a year or two from seeing to not seeing.

When did you start to skate again?

Eventually I realised I needed to worry about what I wanted to do instead of worrying about it all.

It was a process and also being annoyed at people treating me differently.

I didn’t like that people were sad and were not approaching me. 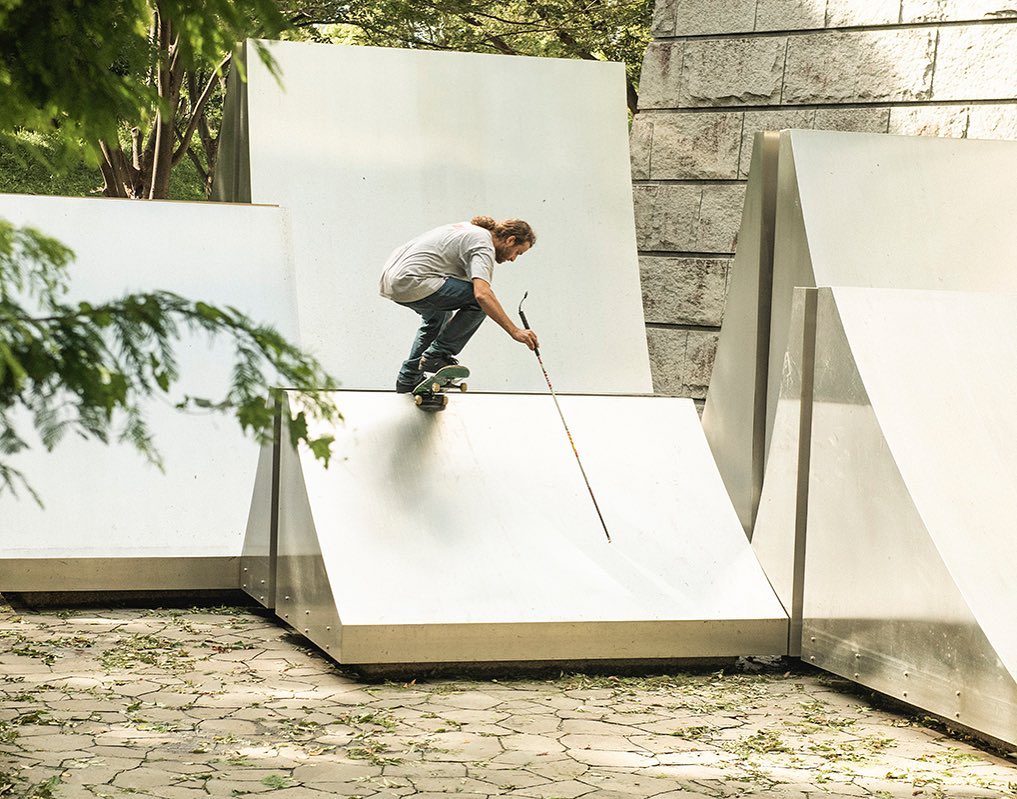 How do you mean?

Skateboarding has changed me over the years.

I started skating again as a way to redefine myself and take back control of my identity.

People kept viewing me as a blind person, someone to pity, now I see a difference in the way people treat me and talk to me since I got back on a board.

How long after losing your vision did your skating first get noticed?

I wanted to change people’s perception of the blind and myself.

I started an Instagram and I started doing stuff that you would not expect blind people to be doing like beer pong, hitting a bullseye in darts, chopping wood.

I made all these videos of myself doing all these random things to show people that blind people can do it too. 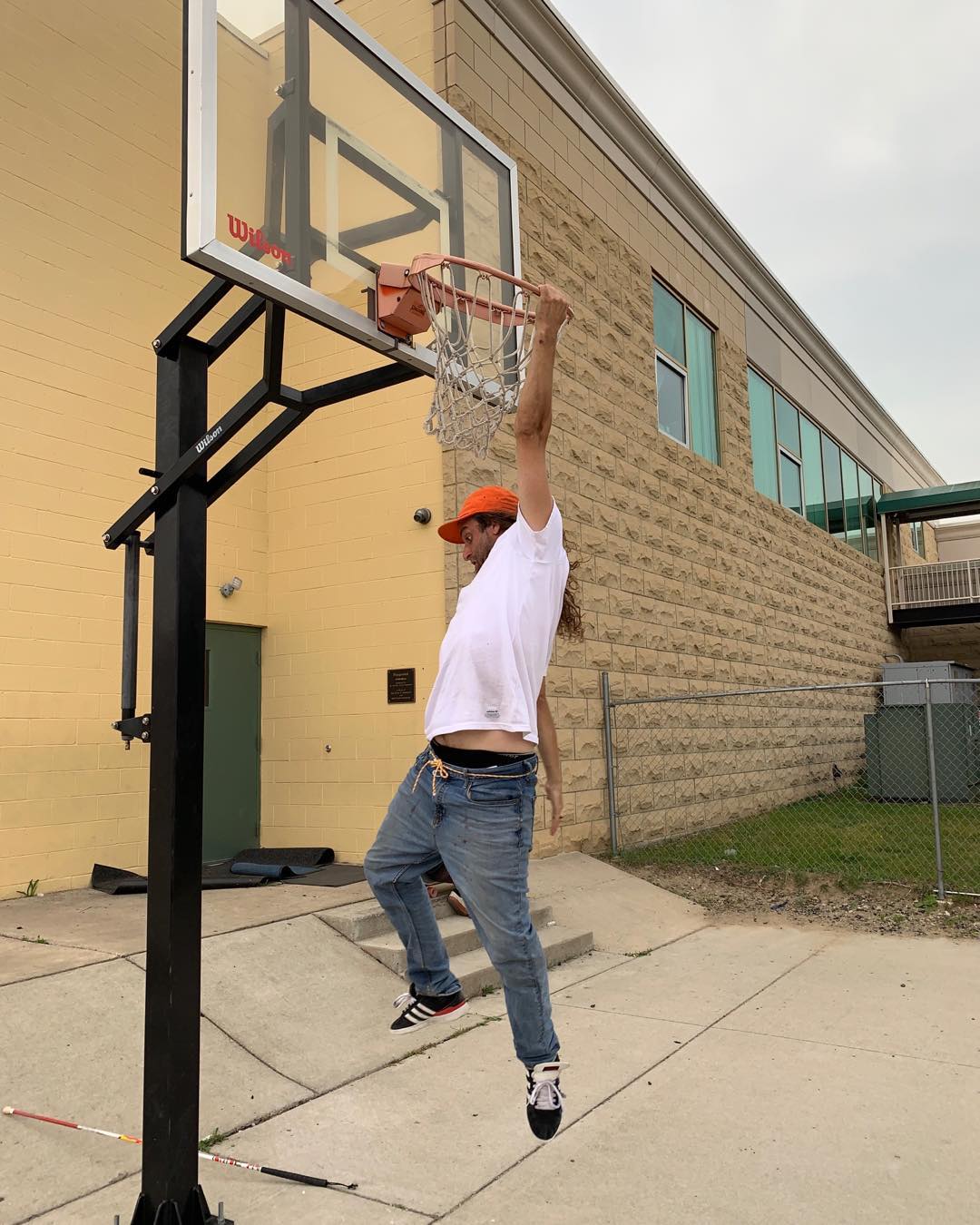 One day I thought about skating and building a bench.

I built a bench and I did a little front board on it and to see what was possilble.

No reason other than just to do it, another video to do.

At that point I wasn’t skating a lot, I wouldnt even consider myself a skater at that point.

I hadn't touched a board in years.

Then I shared the video of the front board and it got shared by the Tony Hawk Foundation and it had a good reception.

So I kept making more videos and they increasingly got more attention.

I didn’t know if I could skate the way I wanted to and enjoy it but I found out that’s what I was enjoying the most and it all made me remember how much I loved skating.

Through skating I regained myself and rediscovered what I like to do.

When did you start skating using your cane?

It was trial and error.

I use the cane for walking so it was a natural progression for skating.

I used to have a little more vision where I could see shadows out of my right peripheral so I could use my cane to reassure myself about where things where but in the last year I don’t have anymore functional vision.

I use my hand a lot and I use the cane to give myself another point of reference to know exactly where the thing is that I’m skating is.

I didn’t want to use my cane at first 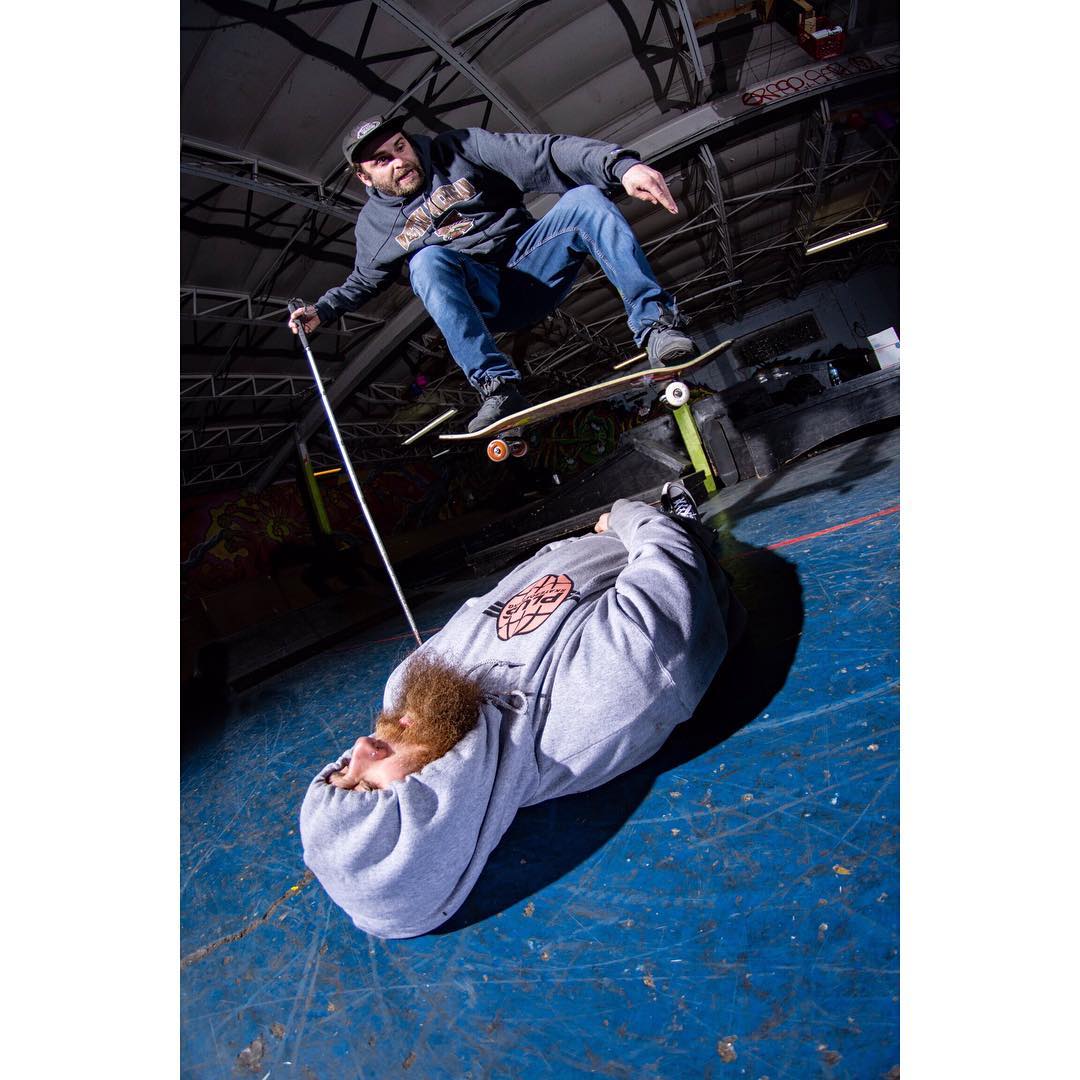 I thought it would be a distraction in the footage, like this weird thing but now I can’t skate without it.

Hardest thing to skate for you?

Gaps are super sketchy, just skating in a straight line is the hardest thing to do.

Anything you have to be precise on.

I’ve been skating for five years as a blind person.

I need to skate everyday to be on point, to be my best, at least 2-3 times a week to feel comfortable and to feel confident.

Have you ever tried a handrail?

No but I’ve been looking for a rail!

My next part that i'm working on is going to be crazy.

I’ve stacked a few clips that I think are technically way further than I ever thought I could go, so if I can keep up this momentum and stay healthy hopefully we can put it together.

That's sick. You've worked as a motivational speaker. How did you start doing that?

It started with basic interviews and then eventually turned into people asking me if I wanted to come out and do a talk. going into blind schools and working with kids, are the funnest ones to do.

I’m just trying to change the perception of the blind anyway that I can.

I did a talk at the Ohio school for the Blind and they recieved 100 boards from Real Skateboards and they have skateboarding in their PE classes now. 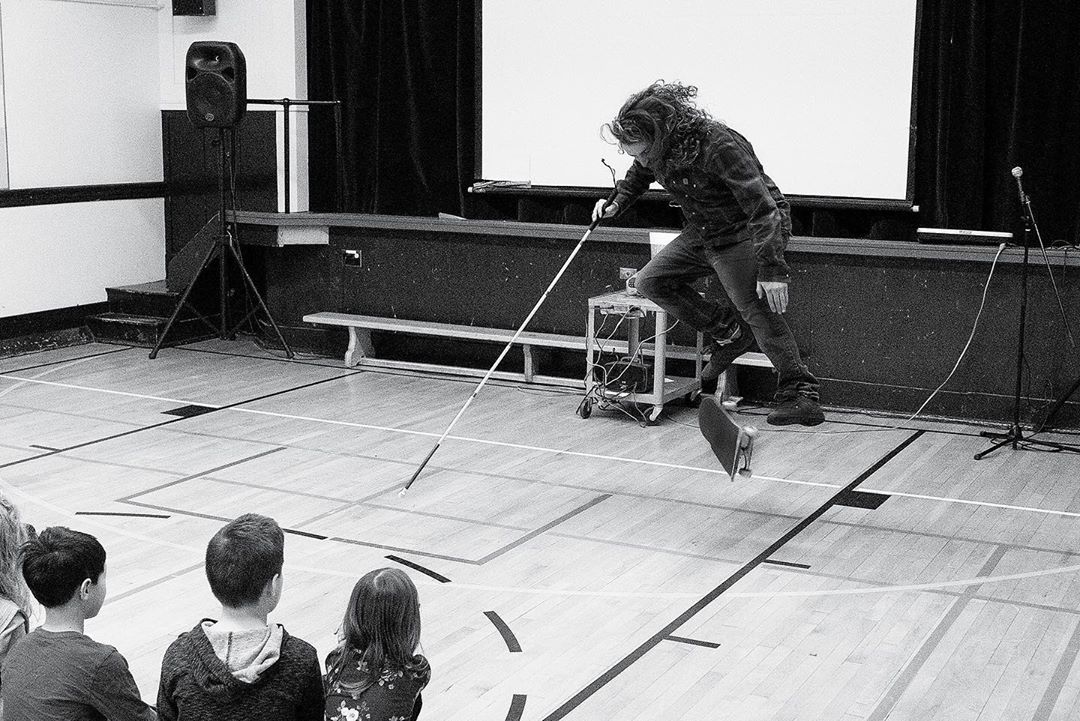 How many speeches have you done?

I do a handful every year.

I've just finished my masters and with everything in skating going I’m pretty spent!

So, what are you studying?

The aim of the course was to help the impaired to get the skills they need to be independent and getting the skills to transition their lives to being as back to normal as possible.

Sick.Why did you want to study it?

Education is valuable on all levels but a big reason I did the course is to find a way to support myself, I can’t just rely on skating to get by in future.

Also studying the course is helping me to build my foundation Keep Pushing Incorporated, which aims to build adaptive skateparks and environments for the visually impaired around America and the world.

The degree helps to legitimise everything in terms of the project so its helping me to bring it all together.

What is adaptive skateboarding?

Adaptive skateboarding is building skateparks with blind and visually impaired people in mind but making it good enough for everybody.

The Keep Pushing Incorporated site will have the 3d rendered images of the concept parks too.

Why did you start Keep Pushing Inc?

I went to a few parks and not having a park that was easy for me to skate was problem, so I thought I could do something to change that.

So I partnered up with Real and we did the Braille board and the proceeds for the board go to Keep Pushing.

The aim of a true adaptive skatepark is that its not just a place for blind skaters but an easy access skatepark for skaters who have conditions like that or similar.

Hopefully that influences builders to make parks more accessible for everyone. 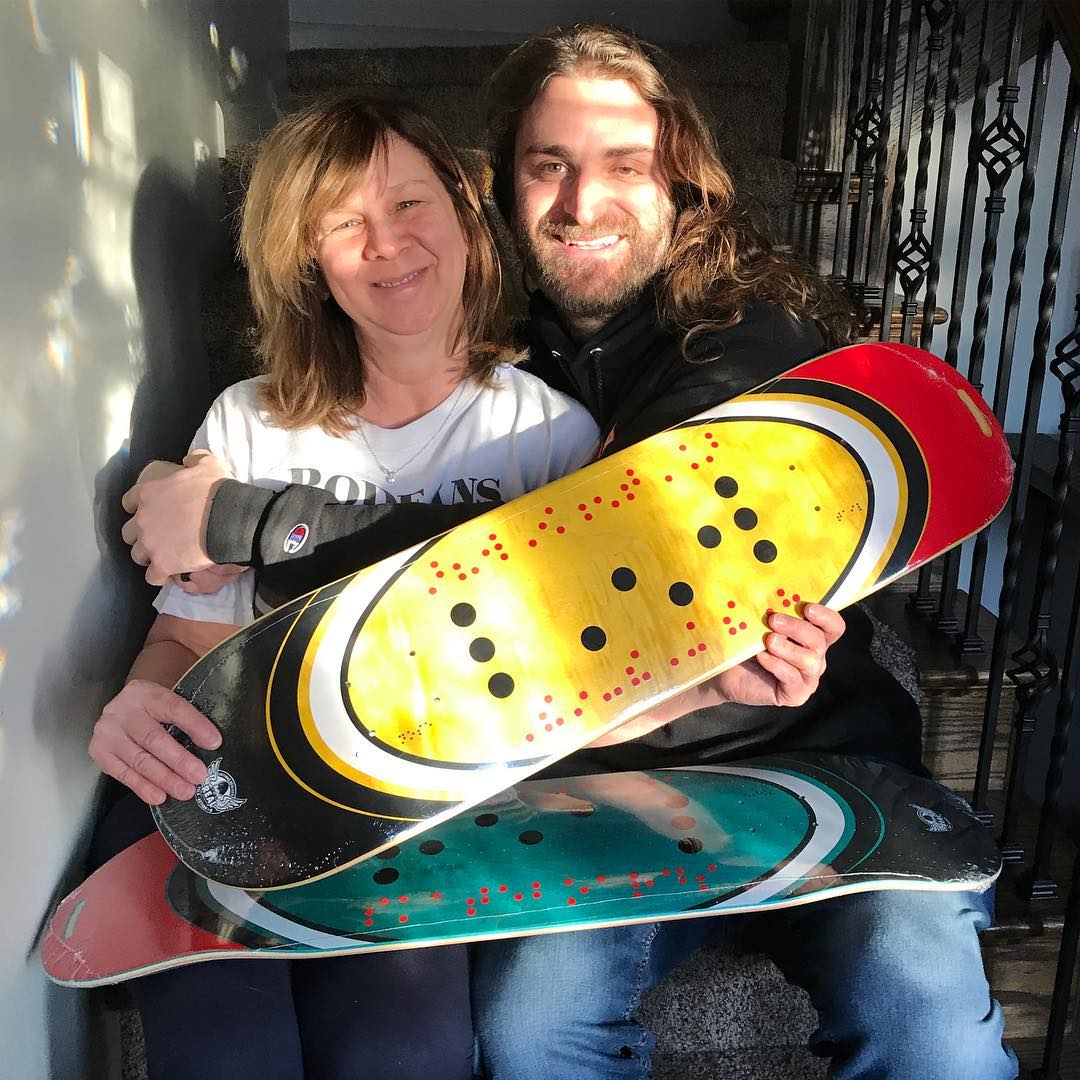 How did you turn pro for Real?

I started reaching out to Jim Thiebaud, he sent me some board and then he through their campaign 'Action REALised' we came up with the braille board.

I don’t consider myself to be pro yet, the board has created a weird grey area but I don’t think that I’m pro for Real just yet.

To me being pro for Real, feels unreal.

I’m stoked that I’m getting Real boards and I'm part of the team.

Real is a company I’ve always resepcted and I’m so grateful to Jim for helping me out and changing the whole skating world for me.

Partnering with Real has opened up the doors for me. 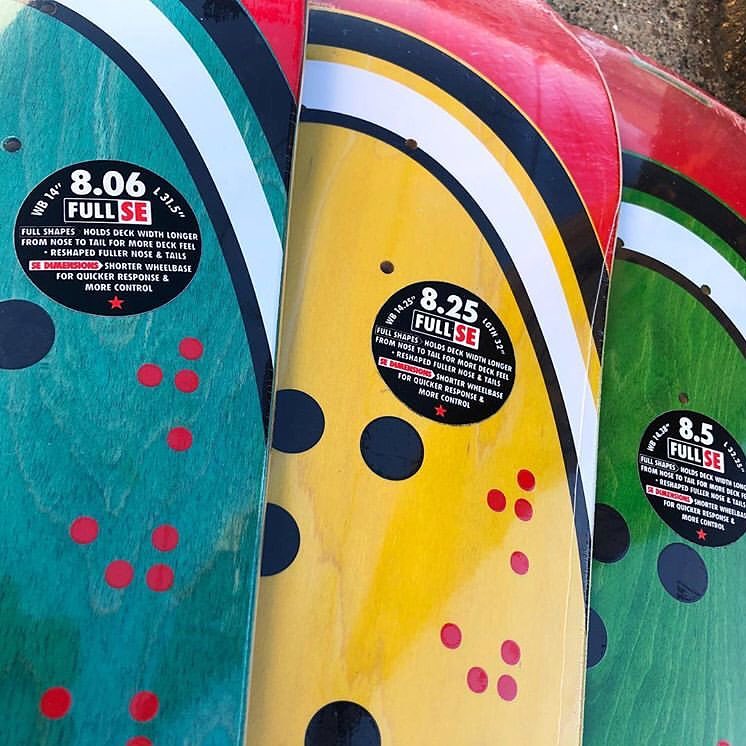 When did you get on Adidas?

I was wearing some adidas and he’s sent me shoes ever since. 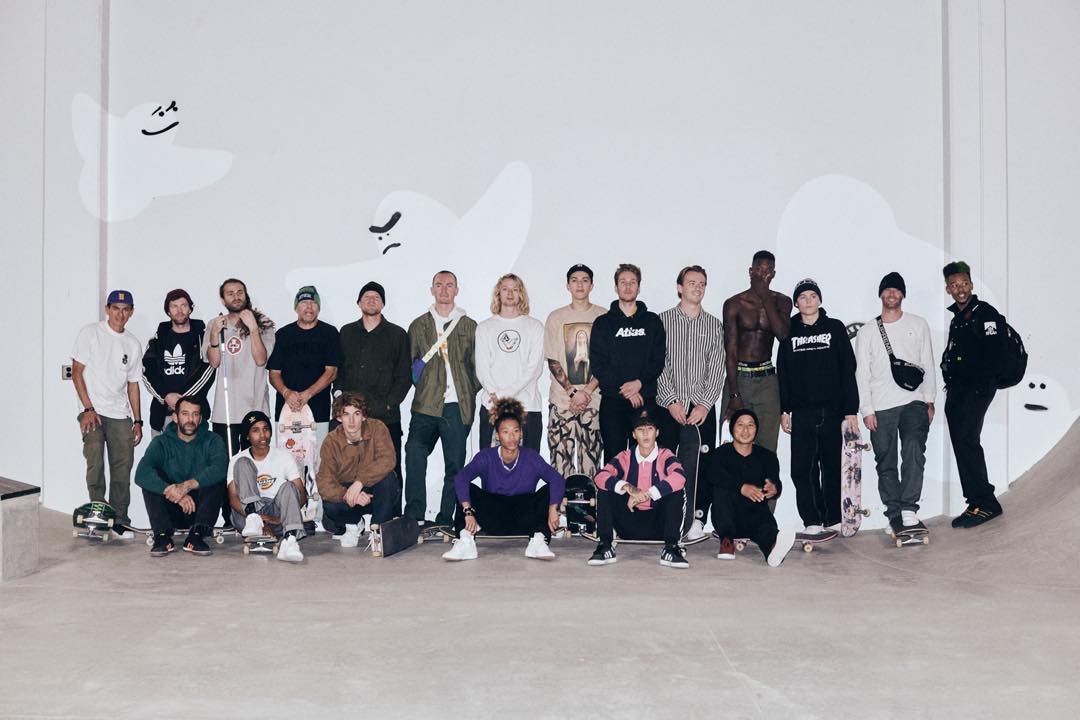 That whole scene has changed for me.

The majority of the people I used to skate with don’t skate but I found a new crew, from a new generation to skate with and we're keeping it rolling.

Nice. What's the last trick you did that got you stoked?

I was so stoked to do that one.

Have you been travelling much?

Not much, I’ve been studying a lot.

But I have just been in London over summer for an event called Innoskate and also to SF for Jack Olson's turning pro party for Real.

It was super sick. Dope people.

I met Wheels the WMCX dude, him and Oscar, the amputee skater.

It was good to see them and also to help push for adaptive skating in the Olympics.

Thoughts on the Olympics?

A lot of people feel weird about it. I don’t put too much thought into it though. 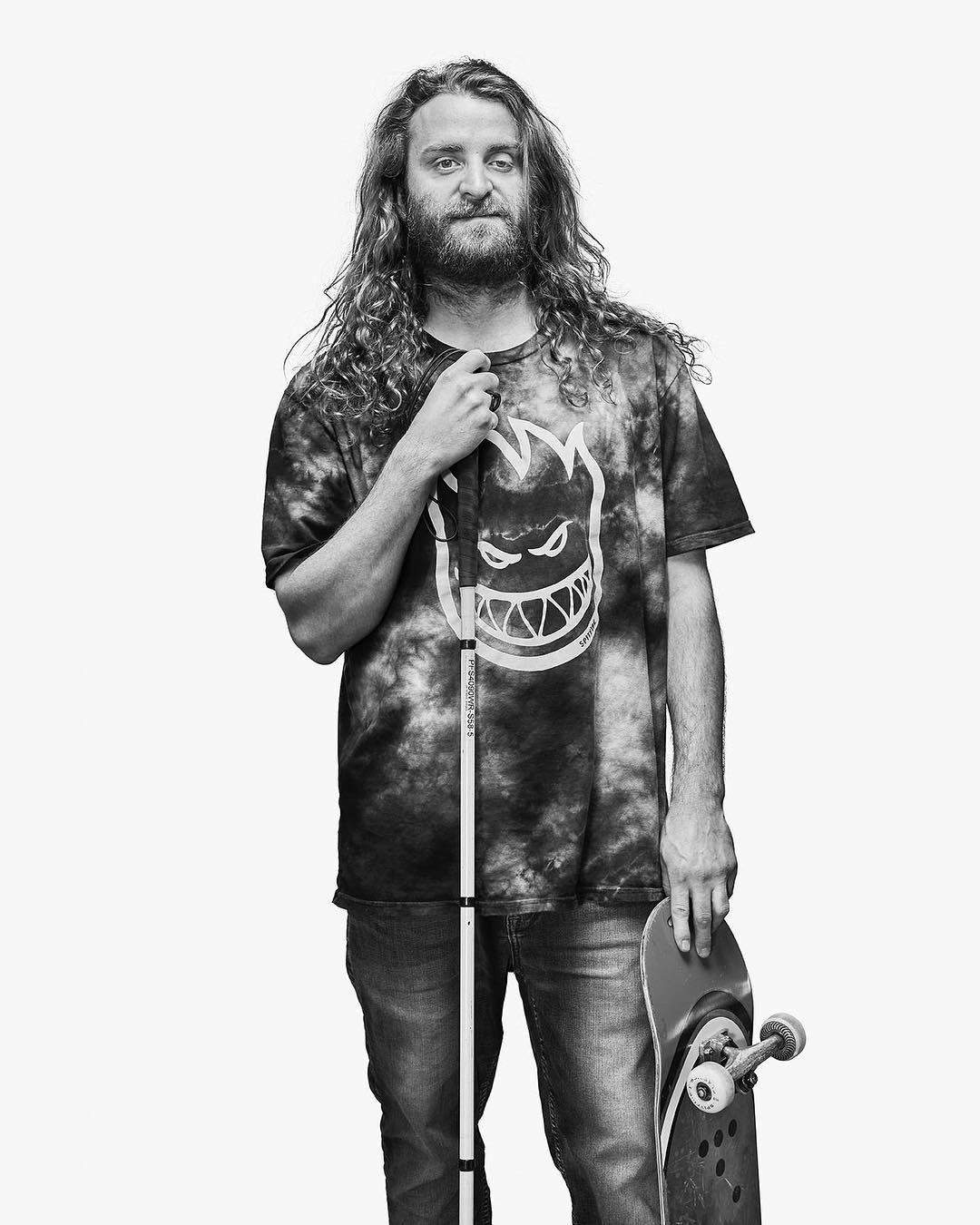 I’m just trying to go with it, skate hard and try not to geek out basically.